I like the Square Strike Wedge because it’s entire design concept is centered around one of the most important aspects in ball striking: the crispness of contact. The idea is to get your clubface as square as possible at impact to maximize the accuracy of the ball.

But how well does the concept translate into concrete results? This is the question that we seek to answer in the guide below. Without further ado, read on for a detailed review of the Square Strike Wedge!

I like the Square Strike Wedge. It’s a solid club with an interesting concept. If you think your short game could benefit from a novel design, this is going to be great for you.

Thins to Consider Before Buying a Wedge

The wedge is probably among the most important clubs in the bag for the simple fact that it gets a ton of action. In fact, roughly fifty percent of all golf shots are short game oriented. If you aren’t scoring from around the green, you are putting yourself at an enormous disadvantage.

Here are a few things to think about as you set out to buy any wedge.

As you look through wedges you will notice that most of them feature a number on the sole of the club. Usually, the numbers will either be 50 degrees, 52 degrees, 54 degrees, 56 degrees, or 60 degrees. However, these numbers can range slightly depending on the manufacturer.

You will probably want to carry at least three. Your set of irons is likely to come with a pitching wedge included but you will also want a sand wedge (54-56 degrees) and a lob wedge (58-60 degrees).

Additional wedges may be needed if you detect yardage gaps in your game.

Cavity Back or Blade?

Blade style golf clubs are thin and feature no indentation on the back of the clubhead. Players usually favor this style because it creates a nice clean look at address. However, it can also make it a little bit more difficult to hit the ball flush. Blades are known to be unforgiving.
The cavity back comes as an answer to that problem of forgiveness. Cavity back clubs do feature a large indentation on the back, which makes the surface area of the clubface more receptive to off-center hits.

However, given how short wedges are, most people don’t have a hard time striking them flush. As a result, most players choose on the basis of what design they prefer.

The lie angle of the club refers to how the wedge rests at your address. Buying off the rack is usually fine for the amateur player. However, if you go to a golf store, you can get measured for a club that has the perfect lie. It’s just a good way to give yourself a little extra edge.

Most wedges come in a variety of lies so that there is something available for everyone.

This club is something of a hybrid between your standard wedge, and a putter. It features a classic putter length of about 35 inches, making it easy to control. However, it comes in a variety of different lofts that are typical of wedges.
As a result, it is perfect for hitting tiny pitch and chip shots around the green. The unique concept makes it good for hitting low runners, and higher lofted shots as well.
Meanwhile, the large deeply offset face also turns into the ball easily so that you enjoy a nice square impact every time.

These factors do come at a cost, however. Because the wedge also features the lie of a putter, it doesn’t work extremely well for full wedge shots. It can still get the job done, but probably not as well as a conventional wedge would.

Let’s now take a look at a few important features and benefits.

So here is a thing that a lot of amateurs don’t know: the longer the club shaft, the harder a club is to hit well. The only reason that some shafts are made longer than others is because that’s where you get ou distance.

However, when it comes to the wedge, you’re looking for precision, not length. This wedge features a short shaft of just thirty-five inches. The idea is to help you put the best swing possible on the ball. You won’t hit your shots very far, but what you lose in distance you should make up for in accuracy.

Straight Back and Through Swing Style

Traditionally, wedges sometimes require a slightly different swing style that requires an open stance. It’s not really a huge tweak, but it is something that beginners struggle with a little bit.

This club eliminates the need to adjust your swing through a unique weighting system that ensures the club rotates through the ball regardless of your setup position.

I am a little bit on the fence about this feature for one reason: it may lead to the development of bad habits. A well-rounded player should feel comfortable opening up their stance for the simple fact that some shots demand it.

For example, you can’t really hit a flop or a bunker shot without changing your swing a little bit.
The feature will help beginners that are struggling with their short game, but it could come at the cost of your long term swing habits.

I don’t normally think about warranties when it comes to golf clubs, but here I think it’s a valuable feature to be mindful of. Why? The tech is a little bit new and untested. If any component of this unique design does fail shortly after purchase, you will be covered.

The clubhead comes in at 330 grams. The purpose of this is simple. The extra weight slows your hands down a little bit which eliminates the likelihood of several common swing mistakes. With the extra weight, you probably are not going to hit it thin or scoop the ball the way that many beginner golfers often do.

Unfortunately, the weight does have its downsides. This is one of the features that will make the club harder to hit on full shots. The extra length and shorter club shaft will both make it very hard to generate a lot of clubhead speed. Since spin is dependent on clubhead speed, this also means that it may be challenging to put zip on the ball.

What People Are Saying About Square Strike Wedge ?

I also went online to find a few reports from customers. The reviews are pretty positive. Most of the reticence pertains to things that we have discussed already in the review today. Some players are having a hard time adjusting to the unique weight and shaft length that this club utilizes.

However, they are also reporting that the results are real. Players are making purer contact, and generally seeing better results around the greens.

Want to see what else is out there? Here are a few popular alternatives that are worth peeping.

The club is made to help players hit the difficult flop shot. It features a high loft and a clubhead design that naturally interacts with the turf in a way that reduces the risk of costly skulls or fatted shots. If you’re not so great at getting the ball high in the air this may be a good club for you.

This club is basically just a super high lofted putter. Unlike the Square Strike Wedge, it can’t be used for full shots, but it will be easy to chip with. It’s the sort of club to look into if you are prone to shanking with your chips.

This chipper/pitching iron is a little bit more like the Square Strike in that it can be comfortably used around the green and on full shots. the big difference is that it features a massive sole that will help you make consistently pure contact.

And there you have it. Our new Square Strike Wedge review is complete, and now comes the time for you to decide how you feel about it. The club isn’t perfect for every golfer, but for the player that is having a hard time around the greens, this might be the club that gets you out of your funk.

This unique design concept goes a long way towards fixing many of the most common short game errors that beginner players are prone to make.

It is true that you may pick up some bad habits with this club if you aren’t careful. However, if you need to save shots where it counts, this club is virtually guaranteed to get the job done. 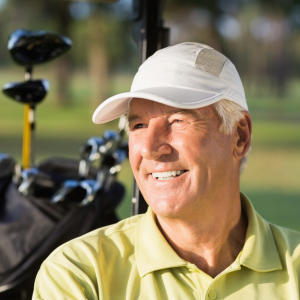 Disclaimer: There are affiliate links in this post. This means that at no cost to you, we will receive a small commission if you purchase through our link. You may read full disclosure policy for more information.